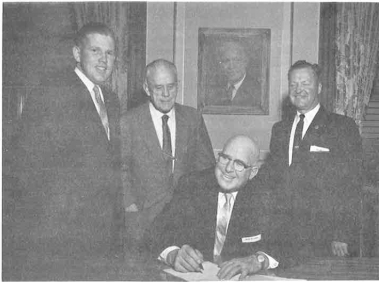 The approaching legislative session present a good opportunity to look back at the history of the Utah Public Employees’ Association (UPEA) and the bills it fought so hard for in the past.

One of UPEA’s earliest accomplishments was passing Senate Bill 67 in 1961. At the time, Utah public employees had no statewide retirement system and the systems in place were not functional nor did they provide sufficient benefits for employees. As a result, UPEA decided to draft legislation to address problems and extend retirement benefits to employees of all state agencies.

Commissioner Arias G. Belnap met at the state Capitol to consider the nine basic recommendations submitted by UPEA’s Bill Drafting Committee. The nine matters discussed that comprised the bill were:

After the bill was drafted and officially presented and supported by key supporters, it passed unanimously in the Senate. Its passage was considered a milestone because it represented a collaboration of state, county, and city units in addition to UPEA.

“Our success to date is a tribute to the officers and committees of the Association (UPEA) who have worked many months in preparing these bills designed to improve the status and effectiveness of state employment in Utah,” UPEA said at the time.

Finally, in February 1961, the bill became law and was set to take effect on July 1 of that year.

UPEA had high hopes that the bill’s passage would represent a strong step forward for those who view state service as a career.

Throughout the years, UPEA has fought to make a career in public service a path that leads to a healthy, happy, and stable life. Its goals have not changed since 1961, and UPEA will continue to help strengthen and improve public employees’ lives by working to create a worthwhile and sustainable environment.