State employees on average earn 11 percent less than the market average, according to results of a new compensation study performed by a third-party consulting group. 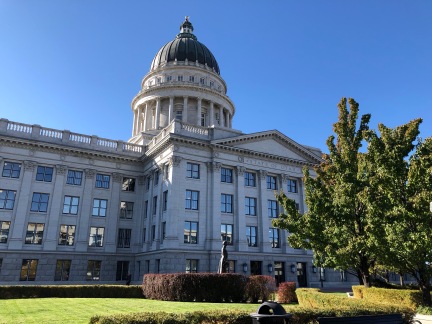 In addition, state employees’ leave accrual outpaces that available in the market overall as demonstrated by the graphic below.

DHRM will use Gallagher’s findings to recommend what lawmakers should focus on as they consider state employee compensation. The Legislature’s Retirement and Independent Entities Interim Committee on Sept. 19 discussed the study. Paul Garver of the Division of Human Resources Management (DHRM) and Mark Goldberg of Gallagher led the discussion.

Based on study results, Gallagher recommended that the state focus on addressing salaries for positions for which pay is 15% below market. Because the state is more competitive when it comes to total compensation and leave accrual, it made no recommendations in those areas.

Rep. Lee Perry, R-Perry, took issue with the salary recommendation. He explained that Box Elder County is unable to recruit or retain employees for positions that pay 10% below market. Addressing only positions with an even greater disparity does nothing to solve the problem, he said.

Rep. Craig Hall, R-West Valley City, agreed. “Until we increase the number of dollars in people’s paychecks, we will not be able to retain our employees.”

Hall addressed the idea that the state offers an above average total compensation package. “I believe that people should evaluate benefits and retirement when considering working for the state; however, it doesn’t matter what I think they should value. When it comes to recruitment and retention right now, what matters is the pay.”

Garver agreed that younger workers do not value benefits as much as previous generations. Salary is the main driver, he said.

“However, the state will never compete with the private sector on pay alone,” he said.

The private sector moves too quickly and can match any increase the Legislature passes. “We cannot erode our competitive benefits as a means of closing the gap on salary” Garver said. “We must focus on increasing base pay and giving employees more flexibility in their benefits.”

He noted legislation passed during the 2019 Legislature that allows employees on the STAR plan, PEHP’s high deductible plan, to convert half of their Health Savings Account (HSA) contributions to cash. He also noted Gov. Gary Herbert’s push for more state agencies to allow for telecommuting options.

Sen. Wayne Harper, R-Taylorsville, said lawmakers need to address both salaries and benefits. “You’ve got to get people in the door; a strong, competitive salary will do that. Then strong benefits will help to retain them.”