Let’s go back in time to the night of March 8, 1973, the final day of the legislative session. The Utah Public Employees’ Association (UPEA) had been lobbying tirelessly for a cost-of-living adjustment (COLA) for state employees. To enable passage of a COLA, UPEA presented an amendment to the state’s Appropriations Act and got it passed minutes before the session ended at midnight. An amendment to this act had passed only one other time in the prior 20 years.

Rep. Dallas Buckway of Ogden stated of the amendment, “It is the intent of the Legislature that in implementing the 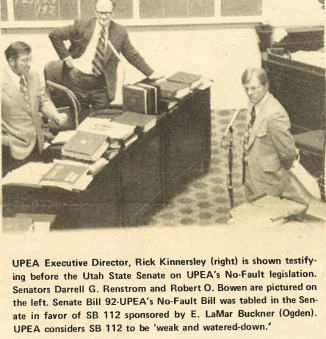 new State Salary Act on July 1, 1973, that all state employees are to receive a cost-of-living adjustment.” UPEA received unanimous support in the House of Representatives for passage of the amendment, but efforts were delayed in the Senate by leaders who refused to bring the bill out of the Senate Sifting Committee. UPEA staffers committed to their lobbying efforts and eventually received the commitment of the Senate to pass the COLA.

UPEA concluded a 60-day “lobbying session” of the Legislature, producing the first-ever COLA. Through the efforts of UPEA staff, Utah’s public employees were granted a 3.3 percent COLA that took effect July 1973.

UPEA staff is already lobbying the Legislature for the upcoming 2020 legislative session. Keep an eye out for employee representatives visiting your worksite, the “P.E.P. Squad” podcast, and informative videos to stay updated on lobbying efforts and how to contact your legislator.