During the Retirement and Independent Entities Interim Committee meeting on October 17, 2019, Dan Andersen of Utah Retirement Systems (URS) assured legislators that their “penny-pinching and overall conscientious attitudes towards money that is not theirs” is paying off for public employees. While giving an overview of where URS stands as a retirement system, Mr. Andersen discussed three main points.

First, compared to the total spending of other state and local governments, Utah is slightly above average on the percent spent on public employees. Mr. Andersen pointed out that the Tier II system will continue to benefit the State as more employees enter it. The Tier II system is meant to reduce the cost employers spend on retirement systems; functioning as a “long term fix for a long-term problem.” 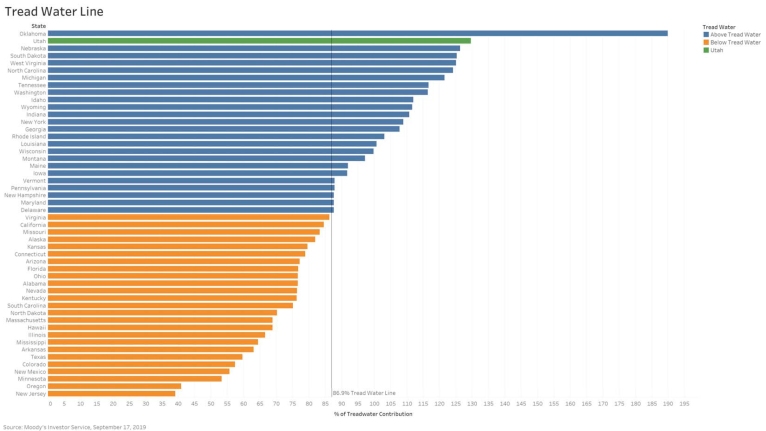 Second, new data from the U.S. Census Bureau demonstrates that Utah’s public employers pay more in contributions than in any other state, at 96% of retirement contributions. This can be attributed to the fact that Utah’s Tier I Retirement System is the only one of its kind in the country where public employees are not required to pay into it.

Finally, Mr. Andersen used the graph below to demonstrate that the fiscal conservatism of the Utah State Legislature that has caused Utah to become the most aggressive state to pay down the unfunded liability. He mentions that while Oklahoma may hold the top spot in this graph, it is only temporary due to legislation passed last year in the Oklahoma State Legislature. In a normal year, Utah is in the top position. By prioritizing depleting the unfunded liability, Utah’s public employees can feel assured that their retirement is being protected.