As the Appropriation Committees hold their final meetings, budget priorities and potential cuts are drafted for final approval by the Executive Appropriations Committee (EAC). The EAC consists of the House and Senate leadership for both parties. These lawmakers will meet several times in the coming weeks to review base budgets, proposed priorities, and potential cuts to make the final recommendations to the legislative body.

The DABC reported an 86% employee turnover rate across the state. The Director of the DABC, Salvador Petilos stated, “We’ve reached a critical point.” Petilos informed the committee that the Draper, Park City, Sugar House and Downtown DABC stores are extremely overused and understaffed. Addressing the staffing issue is part one of the $1.2 million request to increase employees’ salaries. Part two consists of updating, remodeling and building new DABC stores to keep up with increased demand. As anecdotal evidence of the increase in demand, Mr. Petilos stated that the Heriman store that opened 3 months ago has already generated over 3 million dollars in revenue.

Over the past week, the Executive Offices & Criminal Justice (EOCJ) Subcommittee worked to finalize their budget priority list for approval by the EAC. EOCJ has 65 budget requests to consider totaling almost $50 million in on-going funds and $34.5 million in one-time funds. The funding requests for employee compensation included:

Many of the agency presentations have echoed a common theme, employee recruitment and retention problems need to be addressed as soon as possible. The EOCJ handles funding for the Department of Corrections, Public Safety, Courts, and the Attorney General’s Office. In one way or another, each of these agencies stated that if funds are not appropriated for employee compensation, existing problems will continue to impact employee efficiency and consequently jeopardize the safety of Utah’s citizens.

The committee was unable to finalize a budget priority list last week and plans to hold a final meeting on Wednesday, February 19, to complete their business. The committee chairs, Rep. Eric Hutchings, R-Kearns, and Sen. Jacob Anderegg, R-Lehi, have released a draft priority list ranking the above requests in the first, third, and eighth spots for the committee to review prior to the meeting.

The Utah System of Technical Colleges (UTECH) and Utah System of Higher Education (USHE) both brought up concerns regarding employee retention. The Interim Commissioner of UTECH, Jared Haines, gave an introduction to the current compensation problem at UTECH. He emphasized the three year plan that UTECH is implementing to bring instructor compensation up to market. This year UTECH is requesting 1.7 million dollars to increase compensation in order to retain employees and provide better education to their students.

During the committee’s final meeting, Senator Luz Escamilla, D-Salt Lake City, requested funding for a Comprehensive Public Sector Compensation Study; The University of Utah is requesting $280,000 to conduct a study on public sector compensation. The goal of the study is to give a broad context of Utah’s specific employment environment, provide the necessary nuance to fully understand best practices, and ultimately determine opportunities to improve public sector workforce. The study will look at turnover rates, hiring practices, contract workers, work environment, performance review process and other data available data.

The State Office Building relocation has been an important topic in the Infrastructure and General Government (IGG) Appropriations meetings. Agencies have begun to transition to the Taylorsville State Office Building (TSOB), formerly the AmEX Building. Phase I of the transition is complete; moving DAS over to the new building. The rest of the agencies will follow over the next year and a half prior to the demolition of the old building. The Data Center will be the last to move; they are currently working on uploading to the cloud which will smooth the transition.

The old State Office building just north of the Capitol will be demolished and rebuilt in a style to mirror the House and Senate buildings in the complex. The new building will house a Utah history museum, conference center, and artifact collection in an effort to bring culture and arts to the Hill. Construction of the museum will commence toward the end of 2021. The Department of Construction and Facilities Management expressed that current challenges include overlapping projects and employee compensation. The Department said they are simultaneously funding three “once in a lifetime projects”, which include demolition and creation of the building, moving into TSOB, and the construction of the new correctional facility. The department also reported that employee compensation rates are 30-40% lower than private and other local market rates.

When asked about long-term cost savings, the Department assured the legislature that moving to TSOB was a third of the cost of building a new office building. There are other benefits to the move; the current State Office Building houses a maximum of 700 employees while TSOB can house 1500 at capacity. Most of the agencies in the State Office Building are part of the Statewide Telework Initiative. Teleworking has proven to be a huge benefit and helped with employee retention.

The budget requests in the Natural Resources, Agriculture, & Environmental Quality Appropriations Subcommittee did not contain requests for state employee total compensation adjustments. Instead, the Department focused on existing projects. Ivan Djambov, a Finance Manager for Office the Legislative Fiscal Analyst (LFA), presented an overview of the Department of Natural Resources Administration and spoke about the Watershed Restoration project. Division of Wildlife Resources, Park and Recreation, and the Division of Forestry, Fire and State Lands also presented their budgets from the previous fiscal year and their goals moving forward.

Rep. Judkins stated, “Front line caseworkers are professionals and we must pay them a living wage to attract and retain.” During the 2019 Legislative Session, Judkins requested 3 million dollars to begin addressing these problems; however, the request was not funded. This year, she is asking the committee for 12 million dollars, which is the full amount needed to implement a career ladder for caseworkers. This large request serves as a statement to the frustration of the Department and the enormity of the challenges they are facing. Judkins reminded the committee that the problem was identified in 2013 when caseworker turnover was at 20% due to low pay. Because no initiative was taken, the turnover rate increased to 30%. Last year, the department spent one million dollars to train new caseworkers; 30% of those individuals are estimated leave this year.

Despite the urgency of this problem, budgetary challenges render Judkins request “unrealistic.” However, Senator Harper has requested a more modest five million dollars to adjust current salary rates. If funded, this appropriation would take the starting wage for front-line caseworkers from $15 to $20 an hour, as well as increase supervisor salaries and help to address compression concerns. Senator Harper stressed that this request is the bare minimum of what should be done and stated, “We need to compensate these good people properly.”

To reiterate the severity of these recruitment and retention problems, Representative Eliason also submitted a funding request for caseworker compensation. He stated that even though this topic has been brought up, it needs to be discussed further. Eliason emphasized that the legislature should not be surprised by the number of caseworkers leaving because they are only making $15 an hour with a college degree. 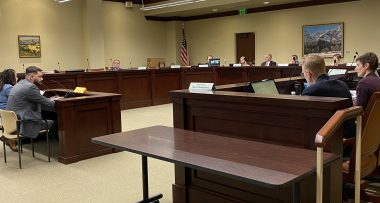 UPEA Executive Director, Todd Losser, testified, “I am here […] in support of funding a pay increase for DCFS employees. If appropriated, this funding will help attract and retain quality employees. DCFS employees perform a commendable service to the citizens of Utah, and I ask you to [prioritize] the funding.”