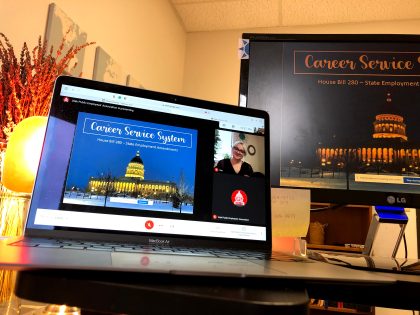 UPEA had the opportunity to discuss H.B. 280, State Employee Amendments, with the bill sponsor Representative Kay Christofferson.  In addition, UPEA has also met with representatives from the Governor’s Office of Management and Budget and Governor Cox’s staff.  During these meetings, UPEA expressed its opposition to H.B. 280 and H.B. 280 1st Sub.

The task force shall:

UPEA has been invited to participate in the taskforce and intends to communicate the continued benefits that the career service system brings to the citizens and employees of the state.

We will be communicating with you to discuss the progress of this bill.

UPEA employee representatives are available for questions by phone or email.  Please share this email with your coworkers and let them know that UPEA is their only voice.  Please support our efforts in maintaining the career service system by joining UPEA.   Join UPEA today!